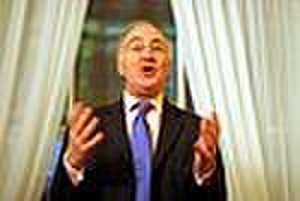 Michael Howard, Baron Howard of Lympne, (born Michael Hecht; 7 July 1941) is a British politician who served as Leader of the Conservative Party and Leader of the Opposition from November 2003 to December 2005. He previously held cabinet positions in the governments of Margaret Thatcher and John Major, including Secretary of State for Employment, Secretary of State for the Environment and Home Secretary.

Howard was born in Swansea. He studied at Peterhouse, Cambridge, following which he joined the Young Conservatives. In 1964, he was called to the Bar and became a Queen's Counsel in 1982. He first became a Member of Parliament at the 1983 general election, representing the constituency of Folkestone and Hythe. This quickly led to him being promoted and Howard became Minister for Local Government in 1987. Under the premiership of John Major, he served as Secretary of State for Employment (1990–1992), Secretary of State for the Environment (1992–1993) and Home Secretary (1993–1997).

Following the Conservative Party's landslide defeat at the 1997 general election, he unsuccessfully contested the leadership, and subsequently held the posts of Shadow Foreign Secretary (1997–1999) and Shadow Chancellor of the Exchequer (2001–2003). In November 2003, following the Conservative Party's vote of no confidence in Iain Duncan Smith, Howard was elected to the leadership unopposed.

At the 2005 general election, the Conservatives gained 33 new seats in Parliament, including five from the Liberal Democrats; but this still gave them only 198 seats to Labour's 355. Following the election, Howard resigned as leader and was succeeded by David Cameron. Howard did not contest his seat of Folkestone and Hythe in the 2010 general election and entered the House of Lords as Baron Howard of Lympne. He has been supportive of the Eurosceptic pressure group Leave Means Leave.