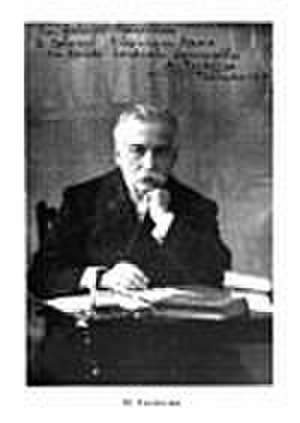 Georges Auguste Escoffier (French: [ʒɔʁʒ oɡyst ɛskɔfje]; 28 October 1846 – 12 February 1935) was a French chef, restaurateur and culinary writer who popularized and updated traditional French cooking methods. Much of Escoffier's technique was based on that of Marie-Antoine Carême, one of the codifiers of French haute cuisine, but Escoffier's achievement was to simplify and modernize Carême's elaborate and ornate style. In particular, he codified the recipes for the five mother sauces. Referred to by the French press as roi des cuisiniers et cuisinier des rois ("king of chefs and chef of kings"—though this had also been previously said of Carême), Escoffier was France's preeminent chef in the early part of the 20th century.

Alongside the recipes he recorded and invented, another of Escoffier's contributions to cooking was to elevate it to the status of a respected profession by introducing organized discipline to his kitchens.

Escoffier published Le Guide Culinaire, which is still used as a major reference work, both in the form of a cookbook and a textbook on cooking. Escoffier's recipes, techniques and approaches to kitchen management remain highly influential today, and have been adopted by chefs and restaurants not only in France, but also throughout the world.